Are you using all of the lumens that you paid for?

Are you using all of the lumens that you paid for?

In the evolution of the microprocessor there have always been uses for faster, more powerful or more compact processors. Historically, with each new generation of microprocessors, electronic devices would in turn become more sophisticated, smaller, faster, and/or cheaper. LED efficacy has been improving similarly to the evolution of the microprocessor, but LED-based illumination designs are not consistently taking advantage of capabilities such as brighter operation at higher drive currents. Today, luminaire manufacturers may find that the surest path to lower system cost is to take advantage of the full LED operating capacity or lumen output that they are already paying for while relying on the growing statistical evidence that they can do so and deliver long product life.

Advances in the production of lighting class, high power LEDs should cause the lighting industry to reassess how to create cost-optimal, LED-based designs. Several advanced LED manufacturers, Cree included, have developed a large and expanding body of information concerning performance maintenance of LEDs over time and temperature. This knowledge of long-term behavior is now standardized in LM-80 data sets that track lumen maintenance and color shift and in TM-21 projections of that performance over longer time periods. See www.ledsmagazine.com/features/8/11/10 for details on TM-21 methodology.

For Cree, the data shows, in the highest quality parts and in well-designed systems, that LEDs can operate at high current and high temperature levels with fewer performance penalties than ever before. This same data calls into question legacy luminaire and driver design methodology that has yielded systems that drive the LEDs around binning-current levels rather than over a wide range of drive currents and temperatures.

Using LEDs at higher operating capacity can deliver more lumens per LED with a corresponding reduction in system cost. For many lighting applications, more aggressively priced products can be created with reduced component count. Such a design methodology can result in higher operating temperatures and lower efficacy. Still, taking full advantage of an LED’s operating capacity becomes an attractive option for applications requiring maximum lumen output at a reduced cost.

Let’s examine the potential of fully using the available LED operating capacity. Previously, a conservative design strategy was appropriate for a relatively young technology such as packaged, high-power LED components. Fig.1 represents that approach at the left side of the shaded area in the light-output/efficacy vs drive-current graph. 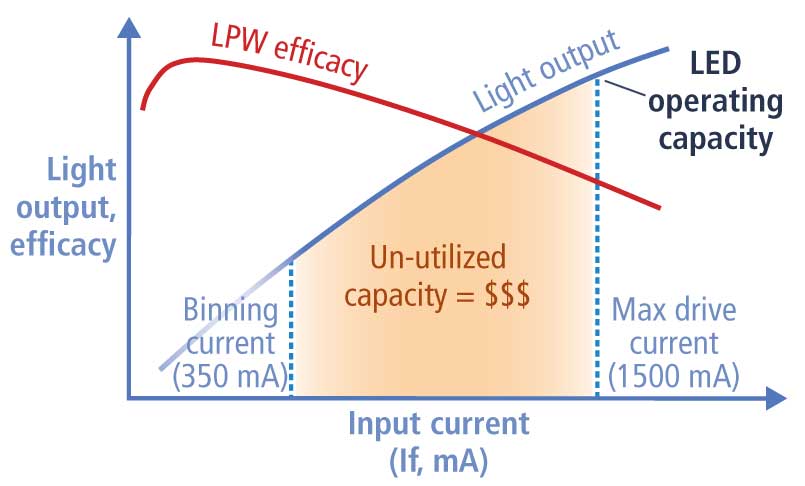 We now know more aggressive designs are desirable and appropriate for cost-efficient designs. For lighting-class LEDs, that is LEDs that maintain chromatic and luminous stability, there is an abundance of unused lumens available to thoughtful system designers. With operating temperature held constant, Fig. 1 shows the under-utilized LED operating capacity. When driven at binning current (350 mA), this LED is delivering less than 25% of its rated capacity. The other 75% is bought, paid for and under utilized.

Driving LEDs around the binning current has been both an industry-wide habit and an engineering-conservative approach to system reliability. But let’s consider evidence showing that much more aggressive drive currents and temperatures are possible without sacrificing long-term reliability. 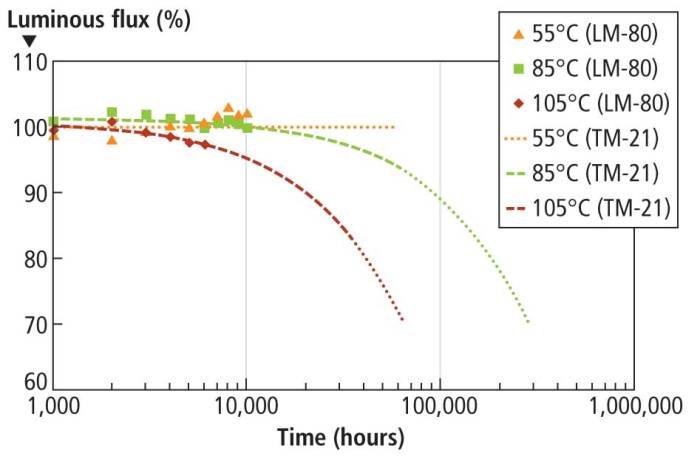 The relatively lengthy projections of L70 LED life (the operating time before the LED drops below 70% of its initial lumen output) even call into question the use of L70 as a demarcation of useful life. Indeed TM-21 projections reveal that state-of-the-art LEDs can be specified at higher lumen-maintenance levels while still delivering acceptable lifetimes. Consider the following TM-21 projections, based on 10,000-hour LM-80 data sets, for the XLamp XP-G LED driven at 1000 mA at an operating temperature of 85 °C. The L95 reported life is 52,100 hours and the L90 reported life is greater than 60,500 hours.

In addition to long lumen maintenance, the latest lighting-class LEDs also perform well in terms of color shift. The graph in Fig.3 depicts the color shift in the XP-G LEDs over time and at different operating temperatures. The family maintains shifts of less than 0.004 du’v’ in all cases.

LED-based system design always requires the engineer to evaluate a series of tradeoffs between power consumption, operating temperature, and other elements such as efficacy and droop. The LEDs themselves exhibit quasi-linear performance in a number of their operating parameters. What’s new in the progression of LED technology is that LEDs capable of higher-current operation make the optimization of the non-linear factors (such as droop and hot-cold operational differences) substantially less-pressing design concerns.

Characterization tools offered by LED manufacturers such as Cree can help the design team contemplate the tradeoffs, especially in terms of efficacy. Cree offers its online Product Characterization Tool (PCT) at http://pct.cree.com.

LED component manufacturers, who provide engineering tools to perform system analyses, allow for rapid, basic performance assessment. When long-term performance and reliability data are available over a wide range of operating conditions, device and component-level non-linearities need not be important selection criteria. They are simply attributes of the devices to be taken into consideration during the design cycle. Long-term performance data at elevated currents and temperatures allows an assessment of whether there is a valid concern for a particular manufacturer’s particular LED component under consideration.

While we’ve shown that driving LEDs at higher drive currents and/or elevated temperatures allows the designer to extract more lumens from each LED, there are practical constraints. The lamp or luminaire designer must consider issues such as thermal system design when looking to reduce LED component count and thereby also reducing costs. The following examples illustrate the system considerations.

Cree’s XLamp MT-G EasyWhite LED is a multi-die LED, optimized for high-output, small-form-factor, directional lighting applications. The maximum current rating for the MT-G is 4000 mA, a substantial 24W in a 9×9-mm package. But a small-form bulb, such as an MR16, cannot dissipate greater than 20W of thermal load. Fig. 4 depicts the LED alone and designed into an MR16 lamp design.

Based on Cree’s experience in building a MR16 reference design we found that heat sinks for the MR16-class LED sources could safely dissipate 4-7W of power. The geometry of the heat sink constrains the drive capacity of the LED system. Fig 5. shows that, in the case of an MR16 lamp, the LED must be driven relatively close to the binning current and far below the maximum drive current. The MT-G LED, when used with a larger heat sink – such as a heat sink to support a PAR38 bulb application with several times the mass of the MR16 heat sink – can support a much higher drive current. 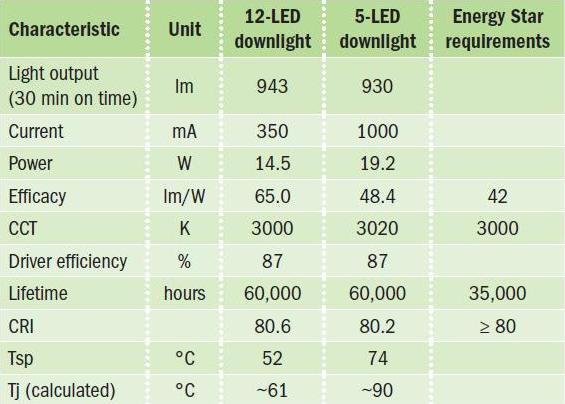 Table 2 summarizes the results. Though differing in efficacy, both downlights meet Energy Star efficacy, correlated color temperature (CCT) and color rendering index (CRI) requirements. In this example one can reduce the number of LEDs in a fixture by 60%, obtaining almost identical optical performance in exchange for an elevated, but still reasonable, operating temperature and reduction in system efficacy.

Note that in some cases Energy Star requirements can also limit the choice of drive currents. Efficacy is a key element in Energy Star and at some point a higher drive current in a particular system design could result in an efficacy spec below the Energy Star limits.

Generally, however, LEDs have far more luminous capacity than most designers are using. The highest quality LEDs are capable of operating at sustained, elevated currents and temperatures far above manufacturers’ binning information. New luminaire and lamp designs should take advantage of these attributes. For lighting class LEDs, there is no reliability penalty for using more of this capacity.

By Kevin Day|February 2nd, 2012|Industry News|Comments Off on Are you using all of the lumens that you paid for?