Why you SHOULDN’T buy an LED high bay that looks like a high bay!?

Why you SHOULDN’T buy an LED high bay that looks like a high bay!?

If you’re shaking your head at the moment, I don’t blame you. The above statement is logic which escapes consumers and LED manufacturers alike- including Empyrean Lighting once!

An overriding philosophy in the development of new LED luminaires and lamps has been to design products that either 1) look exactly like it’s traditional counterpart (luminaires) or 2) works/fits in a traditional fitting for ease of retrofit (lamps).

The merits and inherent problems of point #2 will be the topic of a future post, but here I would like to address point #1, and specifically in relation to high and low bay lighting. 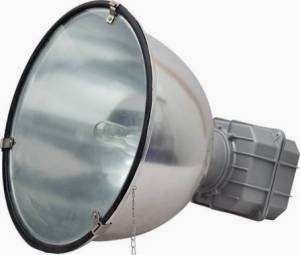 Let’s firstly consider a traditional high bay light used typically in industrial warehouses for close to the last century. They are usually ~400W metal halide, mercury vapour or high pressure sodium lamps which fit into the large conical fittings where the lamp is recessed into the bell shroud which extends ~.5m below the ballast, starter, and other control gear.

These lamps are relatively inefficient, use large start-up currents, contains significant amounts of mercury, are difficult to dim or control, have multiple failure points, do not start-up immediately (re-strike time) and have maximum lifespans around 20,000 hours.These facts have made replacement of this technology a prime target for consumers and LED luminaire manufacturers alike. 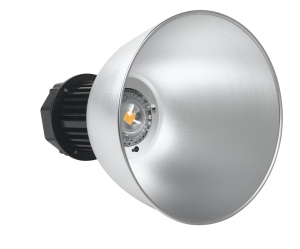 The problem is that both groups are trending toward designs which mimic the traditional design and appearance the high bay light. Whether the lack of vision is due to trying to promote consumer confidence by minimizing change, or a lack of creativity by designers, one can’t be sure. But what is apparent is that substituting these radically different light sources within the same design does play to the strengths of the LED, and worse will leave consumers disappointed.

LED light sources are uni-directional by nature as opposed to metal halide or other filament style high intensity discharge (HID) luminaires which are omnidirectional. To put a single source, restricted beam angle into a luminaire which further restricts the beam angle (bell reflector) is, frankly, counter intuitive and ultimately does not play to the strengths of the technology.

Big, heavy, chunky heat-sinks are not all their cracked up to be in high ambient temperature environments… like most of Australia.

Single source high bay luminaries count largely on conduction of heat from the diodes (which are very hot – given they are positioned together as a single source) through large heat sinks. This does not work in a typical warehouse environment, because to get the heat sink to work effectively there must be heat exchange between the surround air and the heat sink material. Often the ambient air temperature in the ceiling of a warehouse can exceed 50⁰C – the heat sink will likely have an equal temperature to this, meaning there will be no exchange at all with the atmosphere, and your LEDs will “cook”. Reducing performance, increasing failure rate and shortening life expectance. Our

Andromeda luminaries are individually places, and each diode uses both conduction and convection to ensure that the heat is removed efficiently form the diodes even in areas with high ambient temps (one of the reasons we do so much mining work – warehouses in the outback are as hot as you will find on earth).

Simply – you have a single point of light intensity with no redundancies – if the diode fails the luminaire is “dead”.

The Andromeda’s individual pixels are wired so that a single pixel failure (which is very rare) does not affect the rest of the luminaire. Redundancies in any system prevent total failure – single source LED luminaires typically do not have ANY redundancies..

The most common failure on an LED luminaire is the driver. The drivers on these units are buried and difficult to access and replace. Replacement drivers were also not available from the manufacturer who preferred to replace the entire luminaire. Our drivers are rated for the life of the luminaire, however, should one fail they are easily accessible and quick release, meaning a driver change takes less than 120 seconds..

Traditional high bay luminaires project a very tight beam of high intensity light at the workplane. This results in quite a few issues, but two of the biggest are glare and variance. A single high intensity lights source can temporarily blind workers and is more likely to cause glare issues. Also, the higher areas of light intensity on the ground cause variance issues – which means that an even light spread is not achieved – again, potentially causing issues with workers (low visibility, eye fatigue). The Andromeda, due to multiple light sources all individually lensed avoids both issues and provides a very homogenous level of illuminance throughout the facility (this can be seen on DIALux/AGI32 reports).

The bell reflector on high bay luminaires is weak – even the slightest impact can dent it which requires replacement as it will affect the light distribution.

These fittings are also only rated as IP54 – a significant leak in the ceiling could cause major damage to the luminaire or circuit. The Andromeda fitting is IK08 and IP66 – tough as nails. Further, as the Andromeda is lower profile it is less likely to come to grief with forklifts or equipment working below. Throw a basketball at an LED bell shaped high bay… now throw one at the Andromeda… don’t have a ball, stay tuned to our website and we’ll be doing this for you soon enough!

The large lens on high bay luminaires means the possibility of acute build up of dust and other particles which limit light transmission.

Unlike a HID luminaire these particles are not burned off – so they can pose a real issue. The Andromeda uses a very small surface area for light transmission which is also electrostatically charged meaning very little dust/dirt can settle on our lenses and light transmission is retained even in the dirtiest, most challenging environments. Less surface area = less cleaning, and IP66 means quick efficient cleaning by power washer or air jet. 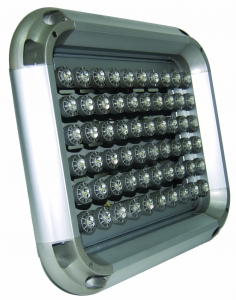 In a recent project, another supplier had recommended bell shaped LED highbays at 250W and 100lm/W – the Andromeda’s we specified (after simulating to required lux levels) were 200W and 110 lm/W. Significant power savings when weighted up over ~222 luminaires.

in the project. Further, due to the tighter beam angles of the LED bell-shaped luminaires 10% more luminaires would have been required to meet the lux levels provided by our solution. Choosing a better, purpose built Andromeda series luminaire will save you money – both short term and long term.

Enquire now about our Andromeda technology

Enquire Now
By Kevin Day|March 18th, 2014|Blog|Comments Off on Why you SHOULDN’T buy an LED high bay that looks like a high bay!?